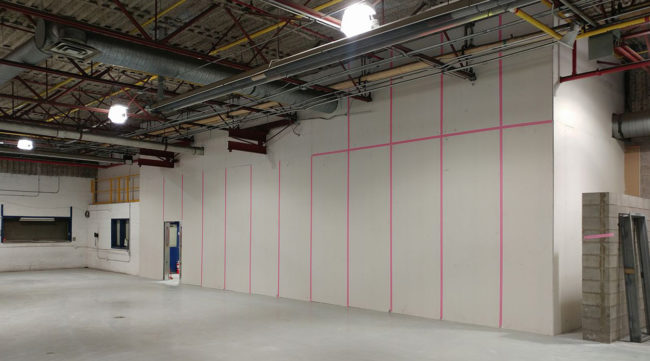 Are you still spending time mudding and taping unseen fire-rated spaces such as elevator shafts, spaces above the ceiling grid, attics, and utility rooms? Save time and money finishing these fire-rated spaces in schools, malls, hospitals, and condos with self-adhesive EZ Flame Fighter. For years, drywall finishers have needed a simple way to fire-proof spaces that no one will potentially ever even see, aside from an inspector or two. EZ Flame Fighter was developed so finishers could stop wasting time with mud and tape while still achieving a fire-rated wall. It’s so easy, the apprentice can even get the job done right.

One of the first things that people notice about EZ Flame Fighter is it’s color. EZ Flame Fighter was developed to speed up jobs, and that’s exactly why it is tinted pink. Inspectors know that if they see pink tinted tape, the seams are approved for a 1 or 2 hour fire-rated wall. Being able to see the pink tape allows inspectors to visually check a space as opposed to the time-consuming process of climbing into these hard to reach spaces to check the finish up-close.

The self-adhesive strength of EZ Flame Fighter wasn’t an afterthought in the design of this product. One hour after application, EZ Flame Fighter’s bonding strength will cure to full strength. Once cured, the drywall will tear off the wall before EZ Flame Fighter will ever come off. If a wall with EZ Flame Fighter ever needs to be finished, do not try and simply mud over EZ Flame Fighter. The exterior facing surface of Flame Fighter is covered with a thin layer of silicon, which drywall compound will not adhere to. If you do need to finish the wall simply spray an oil based primer over the tape and you will be able to mud over Flame Fighter. For fire projection in those tricky, small voids around electrical, HVAC, and plumbing try fire-rated EZ Flame Fighter Caulk.

Have a question? Cancel reply

new products and specials straight to your inbox